Integrated Scientific Resources was contracted to make Van Der Pauw (1958) (vdP) measurement of sheet resistance and linewidth of test structures for semiconductor characterization (Smith, 2003, Walton,. NIST). The program, amply called Morphe, uses the Keithley 3706A with a relay matrix to scan the wafer structure and measure voltages where a Keithley 2450 source meter forces current through the edge of the structure test points. 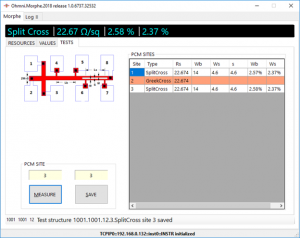 Figure 1.  Screenshot measuring a split cross structure. The top bar displays the sheet resistance and relative deviation of the full and split line width, which are also saved to file and displayed on screen for each measured structure. The program automatically identifies the type of the test structure as either Greek Cross, Cross Bridge or Split Cross

This project builds on Integrated Scientific Resources past experience in Van Der Pauw measurements on a wafer for studying atomic level properties of the wafer as its thickness is diminished by oxidation (Prussin, 2007). This measurement used the Keithley 2182 instrument to source a ternary sequence of currents throw one edge of the Van Der Pauw structure and measure the resulting voltage on the opposite vdP edge using the 6221 voltmeter.